Back to News
Jun
10
2019
Locked In, Locked Up, and Locked Out: Trapped on the Hamster Wheel of Life By Lowell Perry, Executive Director YCNHA

Ever since I embarked on my own personal journey nearly fifteen years ago to do my part to make a significant difference in the world in which I live, I have been both intrigued and incensed by a phenomenon primarily affecting children and families facing significant adversity in our cities. Too many of our young people in communities right here in Yuma, were born into, and are growing up in, a generational cycle of poverty that is much akin to an ever spinning hamster wheel which becomes seems more difficult to escape with each successive  generation.

Ever since I embarked on my own personal journey nearly fifteen years ago to do my part to make a significant difference in the world in which I live, I have been both intrigued and incensed by a phenomenon primarily affecting children and families facing significant adversity in our cities. Too many of our young people in communities right here in Yuma, were born into, and are growing up in, a generational cycle of poverty that is much akin to an ever spinning hamster wheel which becomes seems more difficult to escape with each successive  generation.

Decades of intentional and structural racism have served to keep many members of disenfranchised communities locked in to their current circumstances. Eventually, any of us would become weary of the daily battles, and without some form of hope at the end of the tunnel, start to accept those circumstances.  Many stories regarding the dire consequences of being locked in have been told.  But none, in my opinion, than the example highlighted in the poignant American drama miniseries When They See Us, the tragic true story of the so-called Central Park Five.  Program creator Ava DuVernay has delivered a masterpiece that should be required viewing for every citizen, as anyone with a heart and true love of this country, will be moved to action to improve the society we live in for the good of all people.

You see, we are currently battling a divisiveness in our world that literally threatens the future of the noble experiment known as democracy, as we still are fighting many the same battles concerning equality.  Remember these words from our Declaration of Independence? “We hold these truths to be self-evident, that all men are created equal, that they are endowed by their Creator with certain unalienable rights that among these are life, liberty, and the pursuit of happiness.” Yet too many young Hispanic and African-American men in particular are inserted into the juvenile justice system and ultimately the criminal justice system. This is not by accident. In her book entitled The New Jim Crow: Mass Incarceration in the Age of Colorblindness, Michelle Alexander recounts how Ronald Reagan’s escalation of the so-called “war on drugs” was a primary catalyst behind why there is such a disproportionate number of men of color locked up in this country, primarily for non-violent drug related offenses.

We have an apparent affinity for incarcerating people in this country. A Washington Post article done in July of 2015 confirmed that we lock up more of our fellow citizens than any other country in the world. This national disgrace is bad enough on its surface, however, the way we permanently disenfranchise these individuals after they have “paid their debt to society” is equally despicable. Having a felony on your record, means you are unlikely to ever be able to get a decent paying job, to buy a house or car, or to even exercise your right to vote. For those who enter juvenile and criminal justice systems which have historically not been equitable for all people, this becomes a life sentence.

The new Scarlet Letter is now “F” for felon, signaling that you have been locked out of society. The pursuit of the American Dream, which is supposed to be a right of citizenship in this country, is dead. This amounts to a form of cultural genocide for communities of color in particular. When we also overlay unequal access to a quality education, it is probably fair to say that the likelihood of being permanently locked out is significantly increased.

The good news is that there is something we can do to change this sad situation. It begins with the kids. Children and families in danger of suffering the fate of being forever locked in a cycle of poverty, and part of a cradle to prison pipeline, must be instead introduced into a collaborative cradle to college and career pipeline.  If every child is involved in early learning and has access to quality K-12 education, it increases their chances for success.  I know everyone is into STEM these days, but unless you read, and unless you know about your real history that helps to define who you are, you may still be claimed by life’s hamster wheel.  Yuma has a rich history we all should be proud of, and share with the rest of the world.  Expose your kids to the mission of the Yuma Crossing National Heritage Area which is restoring, preserving, maintaining, and promoting Yuma’s history.

If we have the moral and political will to actually do something about it, we might then perhaps enact more common sense policies, and eliminate the Prison Industrial Complex

which has fostered a form of profit that preys on the misfortunes of those locked up in the criminal justice system. The answer is definitely not to embrace more punitive measures. This philosophy has shown to be grossly ineffective and costly to us as taxpayers. Now don’t get me wrong, there are certainly some who need to be behind bars. But those who have been locked up and locked out of society for a non-violent mistake, or railroaded because of the color of their skin, and impoverished status as were the kids depicted in the miniseries, should not be permanently branded with an “F” and therefore denied their “certain unalienable rights” to a fair shot at pursuing life, liberty, and happiness.

The bottom line is that we might virtually eliminate a world in which too many of our fellow citizens are locked in, locked up, and locked out as adults by asking ourselves a very important question when making decisions and policies in this country – will it benefit our children? We have to set aside greed run amok where shareholder dividends have become more important than whether each of our neighbors, no matter their current circumstances, is able to access the path leading to their reaching their full God given potential. We must be of great courage and not waffle on what needs to be done if we are to live up to the ideals of what this country claims to have been founded upon.

This is not about red or blue, conservative or liberal, Republican or Democrat. It is a responsibility of our basic humanity to work together for the good of all of our citizens to ensure that everyone has his or her fair chance to succeed in this world.

Are you up to the task of doing your part?  Start by checking out When They See Us.  I guarantee you will be moved to action.  Then go to www.yumaheritage.com and get involved in making your community a better place for your kids and grandkids. 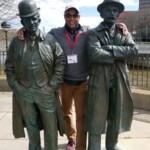