Watch a program or movie about the Civil War and you’re apt to watch armies lining up and blazing away at each other with cannons and muzzleloading rifles that belch huge clouds of smoke.
You’re not so likely to see what went into setting the stage for those battles – the mapmaking that guided troop movements, the road builders clearing paths for the armies to move forward, the building of pontoon bridges that allowed them to cross wide rivers.
Jeff Blansett wants to introduce you to army engineers, the largely unsung warriors whose labors contributed victory – in the case of North.

Blansett, a California high school teacher by vocation and a Civil War re-enactor by avocation, will shine a light on the engineers as a presenter at Civil War Days, which takes place Saturday and Sunday at the Colorado River State Historic Park, 201 N. 4th Ave.
He’ll will bring with him scale models of the pontoon bridges and fortifications the engineers built and some of the tools they used, such as map drawing tables, hand shovels, picks and axes.
No, Civil War films probably don’t spend a lot of time showing soldiers ladling dirt, but a shovel could be as important to survival as a rifle. They allowed the soldiers to dig for cover against those with rifles on the other side.
“Most of the engineer’s work was done at night, and so as soon as the sun went down, you would dig, and by the time morning came, you had a trench,” Blansett said. “The slogan I like to use is, shovels save lives.”
This marks Blansett’s second consecutive year participating in Civil War Days, which brings together more than 100 actors and re-enactors to interpret the era the nation went to war with itself.
Sponsored by the Yuma Crossing National Heritage Area, the two-day event pits re-enactors in simulated battles using replica arms that spew blackpowder smoke like the original guns. Between skirmishes, they’ll be camped on the park grounds, cooking their meals over fire, sleeping in tents and conducting themselves much in the way of opposing armies in the real war. There will also be period minstrel and fashion shows and dance performances, and actor Robert Broski will return in the role of Abraham Lincoln, presenting the Gettysburg Address and Lincoln’s Second Inaugural Address.
Blansett, who takes part in a half-dozen re-enactments annually around Southern California, will come to Civil War Days wearing the uniform of an engineer in the Union army.
He’s known for playing a part – many different parts, for that matter. A civics, economics and history teacher at Twin Palms High School in Blythe, he sometimes ornaments his lessons by dressing in the attire of the historical figures his students are studying.
His participation in Civil War re-enactments grew out of a trip he and his wife made to the East years ago to visit sites of the Civil War. For four years he was played the role of a Union soldier in 71st Pennsylvania Volunteer Infantry Regiment, and his youngest daughter would accompany to re-enactments wearing a dress of the 1860s. Eventually he evolved into the role of an engineer, and while he doesn’t discount the fun re-enactors have shooting make-believe bullets at one another, he likes being able to educate spectators about a lesser-known facet of the war.
“When you ask the typical eighth-grader or high school student what warfare was like in the Civil War, they have in their minds armies lining up and shooting at each other. I present the other side, more of the World War I trench-type side.”
Those trenches got dug by the engineers.
“In every movie they typically show two big armies shooting at each other in two straight lines ... which is right, but I like to present the other half of it. Shovels save lives.
“If they didn’t have shovels, many troops would use their bayonets, knives or cups. There is no bigger incentive to dig a hole than someone shooting at you.”
Apart from digging trenches and other fortifications to protect soldiers, says Blansett, engineers were literal trailblazers, carving out and maintaining the roads that led soldiers to battle. It was engineers who built and carried the pontoon bridges that allowed troops on both sides of the war to cross rivers.
“The (Northern) army had the best pontoons, and they had a lot of them.”
Engineers helped the Yankee army of Ulysses S. Grant make its way through swamps on the way to the siege of Vicksburg. Blansett will talk about that and other battles in which engineering played a role, such as the siege of Petersburg, Va., during which the North dug under the Confederates and packed the mine with explosive to blow a hole in South’s lines.
Gates for Civil War Days open each day at 9 a.m. each. Admission is $8 for adults, $4 for kids 7 to 13 and free for those 6 and younger.
Schedule for Civil War Days
• Saturday
9:15-9:20 a.m.: Flag raising
9:30-10 a.m.: Camp Carleton Band (at the ramada by the Corral House)
10-10:30 a.m.: U.S. Army Corps of Engineers presentation (Union camp)
10:30-11 a.m.: Spencer & Jackson Minstrel Show (theatrical tent)
11-11:30 a.m.: First battle
11:30-noon: President Lincoln’s Gettysburg Address (battlefield)
Noon-1 p.m.: Lunch break
1-1:30 p.m.: Fashion show (theatrical tent)
1:30 - 2:15 p.m.: Dances of the Civil War (flagpole)
2:30-3 p.m.: Weapons demonstration (Confederate camp) 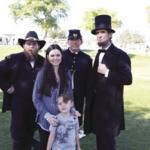