U.S. Sen. Martha McSally of Arizona introduced a bill to the Senate on Thursday that would reauthorize the Yuma Crossing National Heritage Area as such for another 15 years.
Otherwise, the YCNHA will sunset on its federal designation at the end of the fiscal year 2021. The YCNHA first received its designation in 2001 and received a five-year extension to its designation in 2014.
“What this does is it gives us funding from the congressional budget that allows us to keep doing what we’re doing,” said Lowell Perry Jr., executive director of the YCNHA. “We hope that it goes through, and it’s supported by both our senators, and it will be critical to what we’re doing. We appreciate the support coming from McSally and Sinema. They clearly recognize the importance.”

Perry wrote a letter to Arizona legislators in October that was supported by multiple organizations in Yuma including the Yuma County Board of Supervisors and the Yuma City Council. He said that he encourages Yumans to reach out to their representatives at the federal level to support the passage of the bill that McSally introduced.
“We want the people in Yuma to reach out to their Congress people to support the reauthorization and to support the bill making its way through the House of Representatives,” Perry said.
The YCNHA encompasses multiple historic sites throughout Yuma including the Yuma Territorial Prison and the Colorado River State Historic Park. Its job is to preserve, restore, maintain and promote Yuma’s history through these sites. Perry said the reauthorization is what allows them to do this and teach younger generation about Yuma.

“The reauthorization is the most important part about being able to restore, preserve, maintain and promote Yuma’s history,” he said. “It would be a shame if the next generation can’t connect with Yuma’s history first hand. The artifacts we preserve and maintain are important to Yuma, and we want to continue making them accessible.”
Mayor Doug Nichols was in Washington to speak with officials from the Department of Homeland Security and the Bureau of Reclamation. When he heard the news of the introduction of the reauthorization bill, he issued a statement of support.
“The reauthorization of the Yuma Crossing National Heritage Area is vital to continuing the transformational work of preserving the Yuma story in its cultures, in its history and in its foundation for many generations to come,” he said. “Thank you, Senator McSally, for taking the lead and introducing this critical reauthorization bill in the Senate.”
McSally also introduced bills to give national park status to the Chiricahua National Monument and to improve the management of resources and nearby infrastructure at the Casa Grande National Monument. 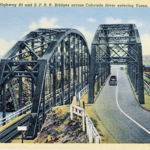