Back to News
Oct
31
2022
Yuma's Riverfront: Past, Present and Future

During the last five years, the Yuma riverfront has seen considerable progress, namely the lower bench of the West Wetlands, with more projects coming up for other parts of the riverfront, in particular the East Wetlands.

“If you haven’t been down there recently, it now has a complete trail system, riparian habitat restoration. It’s just a beautiful area and widely used by the community,” said Cathy Douglas, newly named executive director of the Yuma Crossing National Heritage Area.

The organization completed adobe restoration work in the Brinley Historic District and is working on developing a new nature park in the East Wetlands.

During the last five years, the Yuma riverfront has seen considerable progress, namely the lower bench of the West Wetlands, with more projects coming up for other parts of the riverfront, in particular the East Wetlands.

“If you haven’t been down there recently, it now has a complete trail system, riparian habitat restoration. It’s just a beautiful area and widely used by the community,” said Cathy Douglas, newly named executive director of the Yuma Crossing National Heritage Area.

The organization completed adobe restoration work in the Brinley Historic District and is working on developing a new nature park in the East Wetlands.

Douglas reviewed its 2017-2022 strategic plan to the Yuma City Council during a recent work session and reported on the progress of present projects and future challenges.

The Heritage Area works with the city and State Parks to fund restoration and maintenance of these districts. However, funding is a challenge, in particular for the 380-acre East Wetlands, as it receives limited money from the city and Multi-Species Conservation Program to support its maintenance.

The organization is also involved in the Hotel Del Sol project that aims to transform the historic hotel into a transit hub.

“We are so excited that the city got the big $10 million grant for something that the Heritage Area 20 years ago had envisioned as an idea and a concept. We’re really excited about that,” Douglas said.

As far as the West Wetlands, over the past several years, the Heritage Area has worked closely in partnership with the city’s Parks and Recreation Department. The organization received about $400,000 in state grant funds to restore about 20 acres of the lower bench, the area between the boat ramp and the 4th Avenue bridge. The organization removed invasive vegetation and planted native vegetation.

This project paved the way for a Parks and Rec state grant for installation of a new riverfront trail that connects to Gateway Park.

“It’s pretty amazing that we have a complete front river trail system all the way from the west end of West Wetlands, all the way to the east end of the East Wetlands,” Douglas noted.

The Heritage Area had cleared seven acres in this area when the Gowan Company went looking for a project for 500 volunteers. The organization once again partnered with Parks and Rec to create the Gowan Grove.

And, on Nov. 9, about 900 Gowan Company volunteers will return to work on other projects along the riverfront between the East and West Wetlands.

“It’s just amazing to have that kind of support locally,” Douglas noted.

There’s still work to be done on the West Wetlands, especially in the center of the park. The organization, in another partnership with Parks and Rec, obtained a $250,000 grant from the Arizona Office of Tourism to create about 65 additional parking spaces. A couple of shade ramadas will be moved into this area, with trails leading from the new parking area to the existing trail system.

In addition, the organization will landscape this area “that’s been kind of blighted ever since the park was added 20 years ago. So we’re really excited, and hopefully we’ll get that project going this fall or probably winter,” Douglas explained.

In another partnership with the city, the organization hopes to further develop the far western end of the park and add water and sewer lines for bathrooms.

In the last five years, the Heritage Area has raised about $700,000 to further enhance and maintain the East Wetlands. Work includes restoration of the bankline and a large area burned several years ago. The organization worked on a large hazardous fuels reduction project and right now is in the development stage of creating the new Sunset View Nature Park directly behind the park.

The nature park will feature shade ramadas, connecting trails and a pollinator garden and a wildlife viewing overlook for “one of the coolest views in Yuma during sunset,” with the territorial prison guard tower and the bridge in the background, “over the beautiful wetlands.”

The organization has secured $400,000 in grants funding for this project, including $300,000 of city pandemic relief funds.

In addition, new wetlands manager Jesus Melendrez, a former Marine, secured a commitment from the Marine Corps for all the earthmoving work on a volunteer basis.

Another grant from the Arizona Department of Forestry and Fire Management will fund about 3,000 linear feet of a bank line along the north side of the river that is still heavily infested with invasive phragmites. The organization will remove those and plant native vegetation.

Other challenges are inflation is another challenge, which has placed a huge stress on the budgets, and the die-off of older cottonwood trees just east of the Ocean-to-Ocean Bridge.

One East Wetlands project will focus on finding another way to channel water into the south channel. The Heritage Area will enter into another five-year funding agreement with MSCP this year and hopes to include a major investment to replace the deteriorating water inlet and outlet structures.

The organization also recently met with staffers from the offices of Senators Kristen Sinema and Mark Kelly to pitch water savings by removing all phragmites along the Colorado River, from Hoover Dam down to Morelos Dam.

Yuma Territorial Prison, considered a “jewel of our community,” is financially self-sufficient. State Parks approved up to $6 million in funding for this park over the next couple of fiscal years. About $750,000 will go into planning for projects.

Historical preservation needs to be done on the sally port as well as infrastructure improvements like lighting, a new bathroom and other work that will help the park to better facilitate events and help with revenue.

“All we can do is keep our fingers crossed and hope that it doesn’t get swiped,” Douglas said. “We will see some great advancements in that park if we see that funding.”

The Colorado River State Historic Park has large operating expenses that also present some challenges. The 11-acre park requires a lot of maintenance to the grounds and historic adobe buildings.

The name of the park was changed a few years ago to tell the story of the past, present and the future of the Colorado River. Besides asking for state money, the organization will be doing fundraising to get some money “to help tell that story.”

The master plan for both the Territorial Prison and Colorado River parks was approved in 2019. “It is going to require some major commitments to fully implement the master plan for the (Colorado River) park, but if we did it, I just really think that this park holds a lot of promise. It just needs some funding and some work to give it more of an appeal for visitors,” Douglas said.

The organization has been operating out of the Historic City Hall through a 20-year lease with the city. “It is 100 years old. It’s going to need some significant investment in the next few years. So we’re hoping that we can work with the city to conduct some of those projects and just ensure the building is maintained for another 100 years.”

In the Brinley Historic District, the organization continues to help the Sanguinetti House Garden with funding and technical assistance.

As for the Madison Avenue Adobes, the Heritage Area originally purchased the first three buildings and restored the first two. The second building, the chapel building, has been sold.

In addition, there are plans for a Quechan Riverfront Park on the opposite side of Gateway Park, which will include removing phragmites along the bank line. 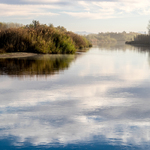